This is caused by apps which are using floating action buttons or other screen overlays (elements which can be displayed over other apps).

In most cases these are apps which run in background, monitor system resources (e.g. processor, memory, battery, ...), react on events (e.g. incoming messages, ...) and display status messages, or app which extend the user interface of android devices. 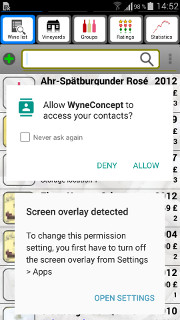 It is important to note that this error is not caused by the app for which you want to change the permission(s) but by an other app and there is no way for a developer to protect his own app against this error.

Unfortunately, for Android 6 Marshmallow there is no easy way to find out the app which is causing the error. We have collected some tips and a list of known apps which may help you to get rid of this annoying message.

A) Knowing the app which causes the error

If you know which app is causing the error you need to disable the screen overlay for this specific app.


You will see a list of all apps that have the permission to use screen layout. Disable the permission for that specific app. And there are more apps using a display overlay.


Disable the permission for a specific system app if one of this apps is causing the message.

B) Not knowing the app which causes the error

If you don't know which app is causing the error there are basically two ways how to solve the error.


As soon as you have found the app and the error has disappeared, you may want to reactivate display overlay for the other apps again step by step, or just leave it disabled.

Nevertheless, the above mentioned step(s) do not help in all cases. To identify an app which is using display overlays you may ask yourself


• Do I have recently installed a new app on my android device which may cause this error ?
• Which of my installed apps is running in the background and is able to open popup windows over other apps ?

Here is a list of apps and settings which are reported to cause this error.


And there are some custom specific UI's from different vendors like Samsung, HTC, LG, Motorola


This list is not a complete list of all possible apps.
If you know any other app(s), please send me an email to extend this list and help other users.

Other useful links and resources

Here you can find even more tips to solve the issue.